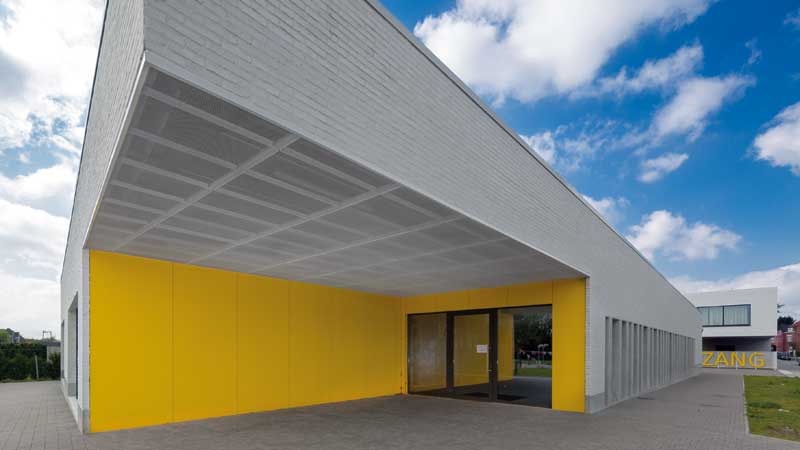 In the De Vogelzang nursery, primary and secondary school in Ghent Oostakker, 400 schoolchildren have been enjoying their new, sustainable school building since 1 September 2016. Funded by the public-private initiative Scholen Van Morgen, all outdated pavilions and mobile classrooms were removed to create space for a new-build of more than 3,000m². The new building consists of 7 classrooms for nursery education, 16 classrooms for primary education, a covered bicycle shed and a brand-new canteen and sports hall. In combination with the existing buildings, the layout of the new-build splits the campus into three separate playgrounds for infants, primary and future secondary classes. During the design, Planomatic - Radermacher & Schoffers Architekten decided against a roadside installation in favour of a transverse construction and modest heights, enabling the new building to fit in perfectly with its environment. The new building combines a rational design with a dynamic look, which is best shown by the impresive cantilever on one of the classroom wings that acts as the main entrance. The decision was made to use a limited and sustainable package of materials, including a Hunter Douglas mesh metal ceiling for the covered playground and entrance to the nursery department – a feature that enhances the building's sleek, modern look.

The school in Oostakker was certainly due a renovation. Most of the buildings were in poor condition, resulting in a lack of comfort and convenience. In recent years, the school had seen a significant increase in the number of pupils, which meant that the canteen and sports hall were too small – and therefore unsafe. What's more, many children had lessons in bland containers due to the lack of space in classrooms.

A dynamic look with a limited package of materials
For the construction of the new building, the architects opted for a limited and sustainable package of materials. The façade took the form of white facing bricks that underline the solid construction. This was broken up by a succession of prefabricated concrete columns. The individual school entrances are cut into the building and can be easily recognised thanks to their yellow façade panels. The materials and the effect as a whole create a dynamic appearance.
Hunter Douglas supplied the mesh metal ceiling for the covered playground, bicycle shed and the entrance to the nursery department. The ceiling is fitted with rails that have a U-shape profile with the opening at the bottom. Panels can be inserted simply by clicking them in and securing them with screws.

"We opted for this Hunter Douglas application as the mesh metal used in the ceiling was also used for the external fencing and barriers, which also helps to create a uniform, aesthetic look. The transparency of the mesh metal allows the light fixtures to be installed and completely hidden from view above the ceiling. The light shines through, and this gives the ceiling a sleek look", says Lucien Kahane, an architect at Planomatic.

A perfect fit for the surrounding area
The surrounding urban area was also taken into account when designing the new-build. A modest building height had to be used to ensure that De Vogelzang's new school building fits perfectly into the surrounding suburban area in Oostakker. Space was also freed up in and around the school to ensure traffic flows safely and freely, resulting in the nursery entrance being separated from the primary school entrance and traffic congestion therefore being eased. The new forecourts also make dropping off and picking up children safer and easier.

Optimal layout
As the nursery classrooms are the first part people see, they are an important advert for the school and therefore needed to capture the imagination. That's why the nursery department is located on the corner of the streets running alongside the school boundary. Thanks to the cross-shaped layout of the classroom wings, most classrooms benefit from facing either east or west.
The school's main entrance, situated right in the middle, has a glass front and rear and looks out over the back of the school campus. The sports hall has its own entrance that can easily be closed off from the rest of the school, while it can also be used by third parties and is easily accessible from public spaces and the car park. The canteen serves as a central meeting point for nursery and primary school classes. The car park is also situated in a secure and accessible location.
Furthermore, the option of expanding the school in the future was also considered, with the necessary space being secured at the rear of the site. The grassed area behind the school is currently used as a pitch for outdoor activities.
During inclement weather, pupils can take shelter under the covered playground, which is erected in a light steel structure and offers the necessary protection from the rain and wind.

Attention paid to sustainability
Finally, significant attention was paid to the use of sustainable materials and construction solutions when designing De Vogelzang's new building. These solutions include the green roof on the nursery department that contributes to managing rainwater. Rainwater from the other roofs is collected and reused for the school's sanitary facilities. The building is energy-efficient (an E rating of 63), and includes large insulation thickness, a ventilation system with heat recovery, and dimmable lighting.
In collaboration with Groendienst Stad Gent, two precious trees – a cedar and an old beech – have been preserved on the site. All the other trees have been newly planted and have colourful blossoms. The new trees put the finishing touch to the outside spaces and are a perfect fit with the building's design. Hedges, flowerbeds and benches have also been added to form a buffer to the neighbours, finish off playgrounds and create public spaces.

Check out the Project gallery