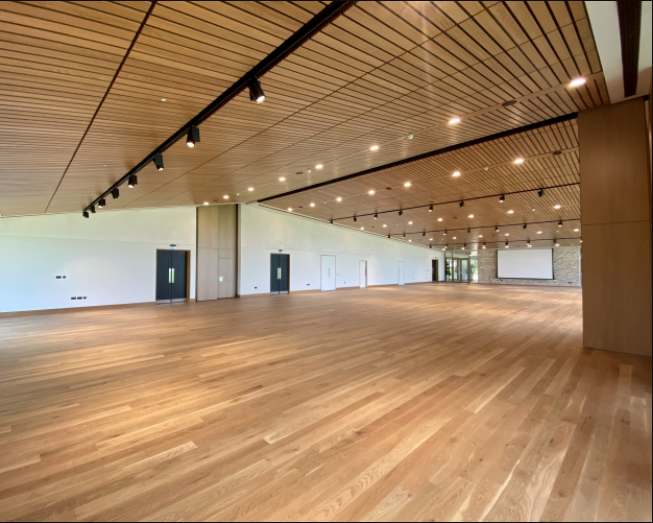 A new £4.8 million pavilion for the Royal Highland and Agricultural Society of Scotland (RHASS) marks an exciting new
chapter for the organisation behind the prestigious annual Royal Highland Show.

The first-class facility will host events, conferences, meetings, gala dinners and weddings all year round, in addition to
the Show, which take place at the grounds and attract almost 200,000 visitors.

And taking pride of place in the main events space are an open wood ceiling and wall panelling from Hunter Douglas
Architectural, which “celebrate” the overall design aesthetic conveyed by the architect.

Designed by Holmes Miller, the 1880m2 single-storey pavilion and events space at the Royal Highland Centre, Ingliston,
near Edinburgh, is now one of the biggest hospitality spaces in Edinburgh.

Because of the need to access the services in the ceiling easily, Hunter Douglas Architectural suggested that its cassette
system would be best deployed for the room and its wood specialists worked closely with the factory to ensure the fulllength ceiling would be accessible under the sloping roof with minimal clearance.

Service panels were also added between the cassettes, to fit lights, smoke detectors and speakers, and acoustic fleece
was fitted behind the ceiling panels to help create a comfortable environment.

Alan Cadger, project director at Holmes Miller, said: “From our first internal design concept, we wanted to express the
ceilings within the main events space in timber. Due to the highly serviced nature of the ceiling void it was essential that
the ceiling was robust and demountable for future maintenance access.

“The overall design intent was to create a building that is a contemporary take on the traditional farmstead building form.
Internally, the asymmetrical roof form is expressed and celebrated in the open timber ceiling by Hunter Douglas.
“We are very pleased with the end product. With reference to the internal views of the main events space, the ceiling is
the most dominant internal feature and helps to define the ambience the client was after. In addition, the product satisfies
the key technical requirements of robustness, demountability and acoustics.

As well as the cassette wall system, wood panels with 13 x 3mm perforations were also fitted on the walls, adding not
just a stylish, decorative touch, but also a practical noise solution, thanks to the acoustic backing.

Hugh Bell, technical sales manager at Hunter Douglas Architectural, said: “What was particularly satisfying with this
project is that not only did we play a key role in advising on the best ceiling option for the space, but we also supplied
the products very quickly, enabling the construction and fit out to be completed on schedule.”

Since the completion of the RHASS project, Holmes Miller has specified Hunter Douglas Architectural on other prestigious
projects, including Murrayfield Stadium, the home of Scottish Rugby and York Community Stadium and Leisure Centre.