When there are ambitions to build one of the world’s most advanced rail transit systems, few compromises will do. So
when the Qatar Government announced a €130bn diversification and modernisation programme, with a first phase being
development of the Doha Metro Network, Hunter Douglas Architectural was honoured to be involved.
The station, designed by UNStudio, is called “Vaulted Spaces” and the bold design echoes historic Islamic architecture.
The architects, reinterpreting traditional Qatari architecture, designed a space that connected the country’s heritage with
its future as an innovative, prosperous state. The exterior of the station is constructed from golden sandstone, while
the interior glistens with a mother-of-pearl iridescence. Complementing these stunning designs and palette choices is a
complex, bespoke-designed Hunter Douglas Architectural ceiling.

The “Petal Ceiling” was an important part of the comprehensive UNStudio Design Manual, and Hunter Douglas
Architectural was challenged to develop a flower design with several petal shapes that would form a striking, modular
ceiling within the station, installed around the vaults. Hunter Douglas changed the original GRG [Glassfibre Reinforced
Gypsum] design to a fully metal ceiling design, ensuring it was fully accessible, durable and low maintenance. Michiel
Langeveld, Manager of Research & Development at Hunter Douglas Architectural, said: “Ceilings are more than
functional; when they are beautifully designed, they are also an integral part of the art and craft of the entire space. They
play an important role in building and interior design because they can absorb sound, which creates a much healthier
interior climate and also helps to achieve optimum lighting. The original architectural design allowed for four different
petal sizes, enabling the creation of 14 different petal designs, although this was eventually reduced to three different
modules. The design for the Doha Metro was complex and the engineering of the system had to be unified to allow for
a one-system solution. This was achieved through the design of the suspension system, which meant that every item
was pre-fabricated and the system was assembled and installed, failure free, with the guarantee of a 100% engineered
joint lay-out view.”

Working with colleagues from VDL, the Eindhoven-based development and manufacturing giant, Hunter Douglas
engineered a construction based on an equilateral triangle. Crucially, each section was designed so that it could be
transported easily and at minimum cost. Because no alterations were required on site, the sections were installed on
site quickly. The design involved a deep drawn petal frame made from 1mm steel with an inlay 15mm honeycomb panel,
which was 2.5 metres in length. The panels were flat and comprised four layers: perforated aluminum with 3.6% open
microperforations; 13mm aluminium honeycomb; perforated aluminium back skin that is 33% open; and an acoustic
non-woven backing. The deep drawn parts of the petal frame, together with the triangle-shaped rear construction,
form the base for the honeycomb panels that are connected with torsion springs. The infill panels were supplied with
a torsion spring system, creating an easy alignment of panels during installation and the completed ceiling is also fully
accessible, for maintenance purposes. Safety was a paramount concern and resulted in a strong durable solution with a
high acoustical performance with NRC rating of 0.85 and a reaction to fire classification SBI A2 S1 D0 / ASTM Class A.
None of this could have been achieved without the support of Imar Trading & Contracting LLC, Hunter Douglas’s partner
in Qatar for many years, which worked with the team to design, create and realise this unique project together.
When complete, the Qatar metro network will be the primary public transport system in Greater Doha. The first phase
comprises 37 stations and three lines, with plans for a further 60 stations and two metro lines. 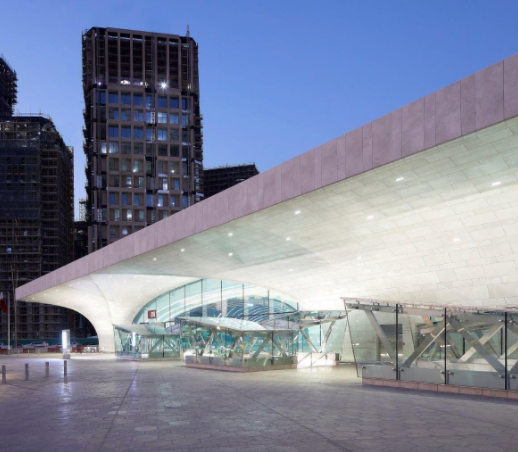 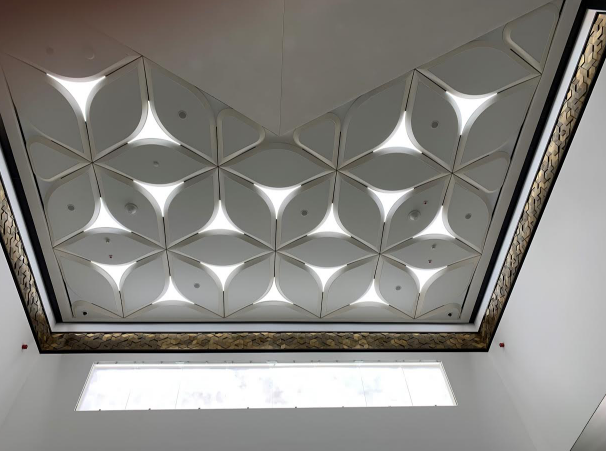